Also check out these reviews by external parties.

What can I see, I’m in love with the Horizon. The ride is super comfortable and there is no hill he can’t conquer. I am truly impressed.

What can be said that hasn’t already? Cooler than a motorcycle. Who needs a car? So much fun to ride.
The look on the bikers faces as you blow by them going downhill at 42 MPH! They are in utter disbelief. My friends and family laughed at me at first; they aren’t laughing anymore.

The thing is, you can maneuver easily at 3 MPH as well as at top speed on open road. I did all the research and this was the best scooter for me after riding two entry-level scooters over 1,000 miles each. Guys at fluid freeride provide top quality service and overall great company to buy from.

A word about safety. You must by hyper-alert while driving these things... especially with regard to other cars on the road. Fact of the matter is.... drivers don’t expect a scooter and are often taken by surprise (understandably at times). Do not trust drivers to yield properly.... several times they make a left turn in front of me because they are caught off guard, even when I have the right of way. Better to slow down or pull over rather than expect them to yield.

Also, there is an excellent mirror you can attach to your sunglass on Amazon for about 30 bucks. Knowing what’s behind you is really helpful when traveling at high speeds on busy roads. This machine probably is not for you if it’s your first scooter. Work up to it with a Horizon or something like that. I belong to many scooter FB groups and there are lots of crashes and injuries. Be responsible.
That said, you’ll have the time of your life on this thing. 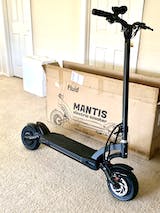 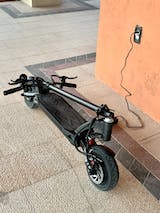 I had a crack develop early on the handlebars of my widewheel. Peter, from Fluid Freeride very quickly responded to my request for help and immediately shipped a replacement handlbar. This might have been the easiest warranty response I've received on any product at any time. Thank you for your great service, Fluid Freeride! I will be a return customer.

so smooth ride take any where folded put closet worth money

This scooter is awesome, it’s so much fun to ride. Very sturdy and made well. We got it going 27 down hill. Buy it!

Great scooter.I couldn't believe how well built it is.

I purchased the horizon scooter as a stress reliever, after reading all the reviews. This is my first electric scooter, and no regrets here! It’s way easier to get around my city on this, rather then using my car. Really smooth ride, and this thing goes fast. I actually got it up to 35 mph while riding. Definitely a quality scooter that won’t break your pockets.

I received my base Kaabo Mantis about 2 weeks ago. And I must say I haven’t stopped smiling sense my first ride. I ride every day and it preforms extremely good. It’s got everything that I wanted the speed and power as well as the range of distance and stopping ability. Best bang for the buck out there hands down thank you FFR😀 I’ll be in touch with you guys I want a handle bar extension buy from FFR😀😀😀 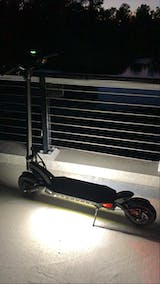 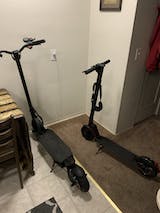 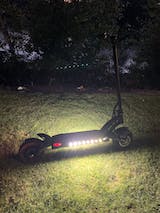 I originally purchased a Hover 1 Alpha it was $350 less than the Horizon. I quickly found that my Hover-1 didn’t have enough power on hills and it really didn’t go fast
enough. My husband has the FFR Wide Wheel and
the thing is INSANE but too much speed/power for me. I decided to spend the extra money and order the Horizon. WOW what an upgrade!! Much faster (like double the speed) and
very steep hills are no problem. The battery life is excellent and I honestly couldn’t be happier. I just
love it. I guess you really do get what you pay for!
Excellent scooter my only critique (*i wish it had a bell.)

Had some minor issues when my new Mantis Pro arrived, but support was very responsive and helped me out quickly. Scooter is very sturdy, riding in NYC streets it is definitely smooth with this beast- Yes, the Mantis is a beast of a scooter. Please ensure you wear proper protection while riding these scooters. Definitely worth the wait. Fast charger is a must of you have can fit it into your budget. This is a great summer!

Every review you've ever read is right. I'm 6-foot 1 ....190 lb 51 years old and this thing will go easily over 40 miles per hour. I have a 120 miles on it so far and this machine needs to be treated with the utmost of respect. Turbo mode both Motors engaged you better hang on my front tire will chirp all over the place racing up and down the sidewalks where I live. I have the standard model not the pro and even after an hour and 15 minutes there's still plenty of power to chirp the front tire and leave you grinning like an idiot from the acceleration. So far so good would definitely purchase again.

J
Bright Detachable Head Light J.G.
It’s a must have for the Horizon

At first I was mad that the scooter had poor visibility at night, but when you add the $49 headlight w the lights you get which are closer to the tires it looks sweet and works really well. You will feel like a boss and have the best headlight setup. For $49 it’s worth the upgrade

My girlfriend and I love this scooter. It’s fast, powerful, and a lot of fun to ride. Upgraded to the 13amp battery and it keeps going for 25 miles plus! Highly recommend it.

I'm so happy with my purchase of the Inokim Light 2. It's been very dependable and has the perfect balance of speed, range, and weight for the urban streets of NYC. Fluidfreeride has been awesome as well offering excellent service, I highly recommend!!

For me good service is as important as a good product, and you provided it!

This scooter is amazing. I'm impressed how much power and range this scooter has. I live in San Francisco and there is not a hill this thing can't handle. I'm so glad I got it.

I purchased the wide wheel scooter and it’s a much longer and smoother ride than my bird es 1. Can’t wait to purchase my mantis scooter next! 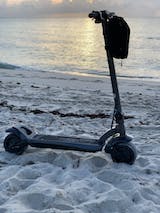 It works great. The caliber that came with the unit was horrible, dangerous and in my opinion defective. This unit solved my problems but I had to pay 90.00 to stop correctly. But I feel confident and it was very simple to install and adjust.

I live in Massachusetts. Last summer I bought a Gotrax GXL V2 as a first scooter to try it out and see if it was for me. I liked it a lot, but I felt limited by the range and it didn't handle the hills very well. After having some problems with the GXL after bringing it out of storage, I decided to spring for something nicer. The Horizon is a tremendous value, in my opinion - a top speed over 20 mph and a real-use range of 20 miles (I bought the 13Ah battery)? The build quality is really good, the suspension is a fantastic upgrade for the terrible roads around here, and having such a long range is a real gamechanger. The increased speed is nice, and so is the much better hill climbing. For a 190 lb rider, the scooter tops out on flat ground at about 22 - 23 mph, which is fast enough for me - it's higher than the speed limit on a bunch of nearby streets, actually, so I feel comfortable taking the lane.

I can't really recommend this enough. I don't regret buying the GXL V2 to test out scooting, but if you're someone who's already used a rental scooter and you were comfortable using it, I would just go straight to the Horizon. I spent a lot of time looking at alternatives before deciding on the Horizon, and you really can't do better than this combination of range, speed, and features for anywhere close to this price.

One negative I do want to mention is that while the scooter has headlights and taillights, they're not great because of their positioning. The headlight is just above the front wheels and the taillights are on the back of the deck. If you're going to scoot at night, or in twilight, I strongly suggest you get a handlebar light and at least a red light you can attach to the back of your clothes or helmet to make you more visible. (The handlebar light they sell is quite nice, so I would recommend that one if you don't have one in mind.)

I decided to get a step up from my Gotrax Ultra and the Horizon was a great choice for what I had to spend. It's faster and I can cruise at 15mph which is the max speed for the Ultra. The motor does get hot if I ride hard which is concerning but I hold back most of the time. The suspension is great for sidewalks and small bumps. Everything feels solid and it shows in the extra weight but is still manageable to lift and carry. Brakes are good with the drum keeping dust and dirt out. Top speed is about 23 with a 200lbs rider. Very happy with my purchase. 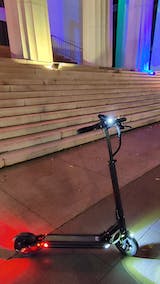 This lock is very strong and durable I love it